Unlike the common research-oriented beginning of other Citizen Science projects, Taiwan Roadkill Observation Network, http://www.facebook.com/groups/roadkilled/ originated from a Facebook group of concerned citizens created in August 2011. Due to the power of social media networks, our group members come from a variety of locations, academic backgrounds, and do not come from any particular group, association, or academy. Most members of our community are not acquainted with one another. More interestingly, this was not an intentionally planned Citizen Science project. Rather it was gradually established through discussions and consensus among members. The current appointment of main staff that operates the website, our goals, information-collecting SOP, software tools for back-end use, database platform and this particular website, were all achieved step-by-step under cooperation and numerous adjustments and revisions.

The primary mission of Taiwan Roadkill Observation Network is to set up an eco-friendly path to mitigate roadkill challenges. We have four main tenets guiding our organization. Our overarching goal is to 1. Mitigate Roadkill. The following three goals are developed based on this main tenet: (2. Citizen Science) We aim to popularize national discourse on such environmental issues and civil participation in scientific research. (3. Environmental Education) Additionally, we will encourage citizens to mitigate roadkill as the first step in fostering lifelong ecological interest and conservation action. (4. Cherish Life) Last but not least, we establish the concept that all life and species are valuable and we encourage participants to help collect and send roadkill specimens to our lab for preservation . This allows these animals to be used for future studies, making greater value of the loss of life. 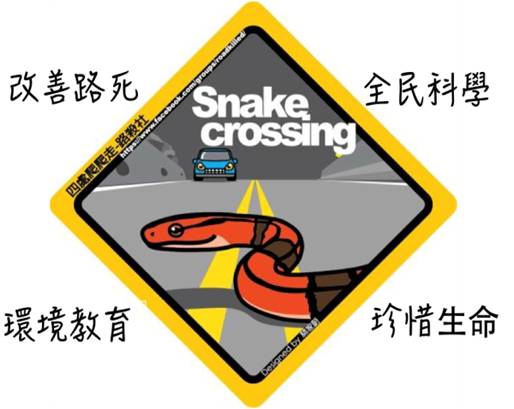 After many years' of data collection, there is an interesting and valuable discovery that shows most of the roadkill data distributed over cities and lowland forests (mountain area) is in suburbs. These are usually eco-failure zones (destruction areas) rather than government’s key protected areas such as national parks, wildlife refuges, reserves or water source protection zones. These locations have been neglected and are extremely lacking in ecological data. Findings of Reptile Road Mortality are important because they help make up for the shortage. After long-term observation, many participants realize the astonishing amount of animals living in their surrounding areas, including endemic species and protected animals and rare species, but they just never saw them alive. Despite the shock of roadkill, Reptile Road Mortality has successfully engaged a large and diverse crowd. Many are citizens who do not belong to any actual ecologogical or environmental group or field of study. Rather than silently passing roadkill, they are now able to take action as contributors of scientific research and are advocats for environmental issues, sharing these concepts with their friends and families.

Roadkill specimens and data collected by Reptile Road Mortality have been the main source for the monitoring of rabies in the country, showcasing the invaluable nature of the group. It not only helps the government save a huge economic sum through reducing the need for sampling in the field and monitoring, but has also become a significant and reliable monitoring program for the condition of the rabies epidemic for making policy. (For more information, please refer to our Campaign: Monitor of Rabies)

Moreover, in cooperation with Bureau of Animal and Plant Health Inspection and Quarantine and the Institute of Wildlife Conservation of National Pingtung University of Science and Technology, the “Investigation of Toxic Birds in Farmland” was carried out in 2015. By sampling specimens and keeping records of suspected poisoned birds, we investigated the association of crops, types of pesticide, and damage to wildlife to inform domestic regulations of specific pesticide usage, decreasing the occurrence of environment poisoning.

In the future, Reptile Road Mortality will focus mainly on mitigating roadkill. Via collected information, we will identify roadkill hot spots, seasons of high roadkill occurrence, and effects of roads on threatened species. We invite local citizens to take part in the work of mitigation in person.(Read more: Green Island Metasesarma Aubryi Rescue Mission) This allows citizens to gain understanding and care for the environmental around them, and empowers citizens to participate in the health of their own environment.In cooperation with bureaus such as the Directorate General of Highways, research from this program provides the Taiwanese government with the ability to carefully consider future development projects for a future with friendly roadways for pedestrians, drivers, the environment, and wildlife.